“May you never hunger.”
Food and sex have always been linked for me. I love licking things off of flesh, letting the natural human salt taste mingle with the flavors of the edible. I also have certain types of food that I like after sex. I like low alcohol content beverages (like beer or wine), something salty, something greasy, and some sort of protein–preferably something raw or rare. For example, beer, super rare steak, runny eggs, and heavily buttered toast is the perfect post orgasm meal for me. I think it has to do with the primal urges that are evoked during sex and our body’s natural urge to replace spent calories. It also helps me to ease down slowly from the endorphin high, instead of crashing down quickly with unpleasant emotional turmoil.
In Wicca, and in some other Pagan religions as well, there is the practice of cakes and ale. Traditionally the cakes were actual cakes that were blessed and then passed around with the sentiment, “May you never hunger.” However, now it’s any sort of food. In many groups, one person will feed the person next to them as they say the wish, and on around the circle. To balance it out, a communal cup is often passed, with once again one person holding it while the other person drinks from it as the cup bearer whispers, “May you never thirst.” While these two wishes are rooted in the not so distant past when survival was not certain due to a very probable lack of food and liquid, the custom of feeding your neighbor and bearing their cup reminds me of a wedding feast, where the bride and groom feed each other and entwine arms for the bridal toast. And in a certain sense it is like a wedding feast. A lot of Wiccan groups, and to a lesser extent other Pagan groups, will plunge an athame into the communal chalice that is about to be passed. Usually (but not always), the athame is plunged by the high priest, while the high priestess holds the cup. This is a very visual but family-friendly version of Hieros Gamos, or Holy Sex (which will be covered more in depth at Beltane). 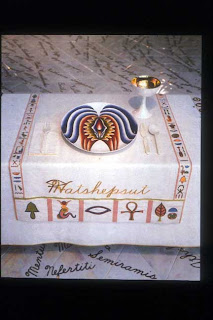 While sex and food is not an unknown concept to most people (most of us have done body shots or eaten whipped cream off of a partner), and practicing Wiccans are intimately familiar with cakes and ale and perhaps even the more exotic and blasphemous chocolate and coffee rituals, a lot of couples never think to merge the two practices together, even if they engage in regular ritual sex. So, to inspire your rituals and tantalize your taste buds, I’ve compiled an extensive list of foods to whet your appetite.
The Pantry
The most obvious way to incorporate food and sex into your rituals is oral sex. For me, some one performing really nice cunnilingus on me gives me the same feeling I get when I eat a hot, fresh Krispy Kreme doughnut straight from the deep fryer. It can be a lot of fun to reciprocate the favor by sliding a Krispy Kreme Doughnut onto a nice erect penis, and take my mouth and run my tongue….well, I’m sure you can imagine I what I like to do. 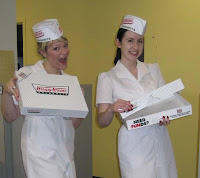 Flavored lubricants can be used to enhance the experience, or you can raid your kitchen for suitable flavors. Unsolidified Jell-o works well, as does jellies, syrups, and live yogurt, particularly if you’re putting flavors in a vagina. I would recommend being careful introducing foreign liquids to your or a partner’s vagina because of the risk of infection. Live yogurt, however, is relatively safe since it can be used to make a home remedy to combat yeast infections. Edible underwear and lingerie, which adds the same sort of excitement as flavored lubricants, can be be made with fruit leather (more commonly known as fruit roll-ups). Some of the commercial fruit leather now come with cut-outs, which can add a sweet cuteness to your ritual. I personally like the ones with star cut-outs because of course my vagina should be the star of the ritual! 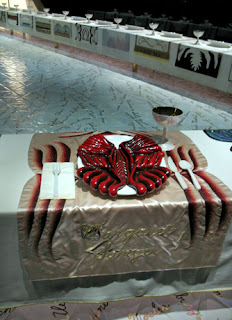 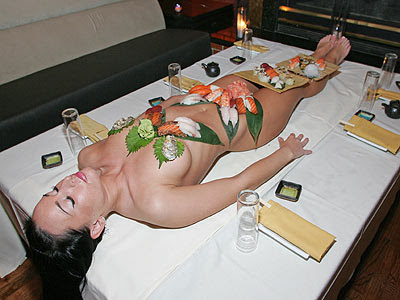 It’s ideal if this person is the altar for the entire ritual, as was discussed in the bastinado entry. The possibilities are fairly endless. For beginners, the cakes can be eaten off of the person and body shots (or non-alcoholic juice shooters) can be used for the ale. To make things more interesting and to add in more magic, the body altar can be turned into a cake. Coat the body with frosting and then decorate. Icing can be used to apply sigils 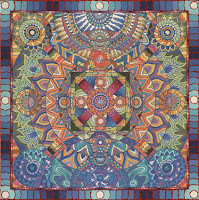 A variation on the body cake idea is a body mandala. A mandala is an intricate, often symmetrical design that is created to be used as a meditation aid with the understanding that it will be destroyed after creation. Often the creation of the mandala is part of the meditation. With a corporal mandala, icing, whipped cream, honey and other syrups, colored sugar and sprinkles, and pretty much anything edible can be placed on the person’s flat body in intricate, symmetrical patterns. Once the design is completed, the participants can engage in a free form meditation that is then continued as the mandala is consumed.
When planning out your cakes and ale with a body altar, don’t forget about the supposed aphrodisiac effects of seafood. Oysters, sushi, sardines, and other maritime delights can be put on the menu. If you’re doing a love spell, especially one that invokes Aphrodite, scallops would be an appropriate choice since she rode the waves on a scallop shell. Raw seafood, like oysters, will be covered more in depth in an upcoming entry in this series.
With body altars and mandalas, don’t forget the emotional and spiritual needs of the person whose body is being used. This type of service brings along its own meditations and spiritual insights for the person, and the altar should be encouraged to share his/her experience after or during the ritual. 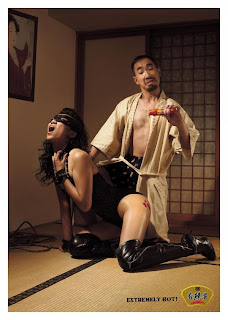 My favorite way to incorporate food into ritual is through S&M and bondage. Here, as with the other suggestions, there are infinite possibilities and combinations. As the above photo suggests, hot sauce is always a favorite, although beware of putting hot sauce on delicate surfaces as it’s very caustic. However, the capsicum in hot peppers, when ingested, triggers your brain to produce endorphins–the same chemical that is produced during sex and BDSM play.
A sweet way to incorporate some kink with food is with licorice and Twizzlers. There’s a reason why licorice is often described as being in ‘ropes’ or ‘whips’. Long strands of the candies can be used for edible (but not durable) bondage, and the strands sting more than you may imagine. Single strands can be used, like you would a belt, or multiple strands can be used together as an edible scourge. While candy is nice, I usually need something more spicy and stout. Long meat sticks, like Slim Jims, fits this need. Meat sticks have more of a thud than the candy, but are still flexible enough not to break easily. I prefer to use the Jack Links meat sticks because they are a little thicker than Slim Jims, can when applied in rapid succession are strong enough to take your breath away and leave vivid marks. 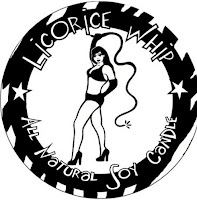 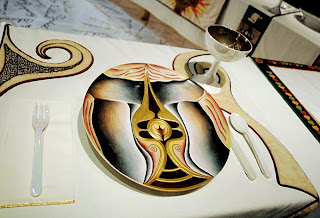 As with any sort of S&M and or sex ritual, be responsible.  Use safe words and condoms and respect boundaries.  No under aged participants or spectators.  Outdoor sex should be on private property.  Bondage should allow for blood flow.  If you break skin, use first aid to treat it and clean your equipment properly.  And for heaven’s sake, avoid the spine and kidney area!
Check out these awesome folks:
Sub-shop.com http://bit.ly/subshop
Tweet