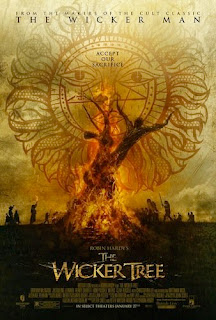 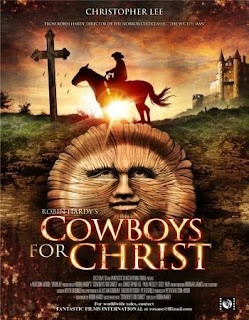 The whole time that I watched the movie, I kept asking, sometimes audibly, “Where’s Rowan Morrison when you need her?”  ”Where’s the Landlord’s Daughter?”  ”Where’s the music!”  ”Caper, damn it, caper!!!!”  I wish the movie had capered.

The basic premise of the movie is similar to the original.  I suppose that makes sense since both movies were made by Robin Hardy, and “The Wicker Tree” is suppose to be a sequel.  Instead of the populace suffering from poor crop harvests, the populace this time is suffering from poor baby harvest due to a nuclear accident. Instead of a single born again virgin cop, we have a pair of born again promise ring Texans.  This time, it’s not just Rowan Morrison that needs saving, it’s all of Scotland’s souls (I’m sure the Church of Scotland would have something to say about that since all of Scotland’s souls are predestined..)

“The Wicker Man” was full of wonderful, memorable songs, many of which I dearly love to fuck to.  Not this movie.  Yes, it has music.  It even has music as one of its themes, but I don’t remember a lot of the songs.  The bits that I do remember, I can’t find anything about them on the web.  I remember something about the Laddie and horses of the fairy breed. 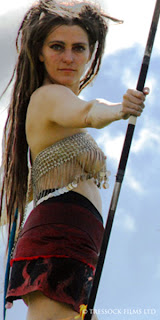 The movie also needs more sex and nudity.  Lolly is the only character who is comfortable with sharing her goods.  Some of the other characters talk about being comfortable, but when it comes time for show and tell, their clothes never come off. 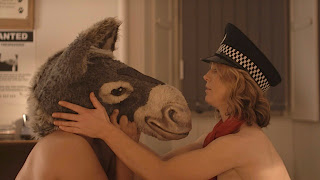 “Scots and Englishmen can always find their way to the pub, but when it comes to the clitoris, they think it’s an island off of Greece famous for its ouzo.”  That’s the best line of the movie.  Only one line.
I did like the character of Jack the Raven Man.  It was fun to figure out which poems he his dialogue came from.
I also liked the card trick scene.  In this scene Promise Ring boy whips out one of his missionary tools and has corresponded the cards in a standard playing deck to the Bible.
Here’s my Wiccan version:
1: 1 stands for how many it takes to worship.
2:  2 stands for Hieros Gamos, the holy union.
3:  3 stands for the Triple Goddess: maiden, mother, and crone.
4:  4 stands for the four directions: north, south, east, and west.
5:  5 stands for the five elements: fire, air, water, earth, and spirit.
6:  6 stands for something, but I don’t really remember what.
7:  7 stands for the Charge of the Goddess because you’re pretty lucky if you remember all the words.
8: 8 stands for the Eight-fold path.
9:  9 stands for Hecate, the crone at the crossroads.
10: 10 stands for I’m too fucking tired to come up with something clever.
Jack: The Jack is the young Lord, ravaging the countryside.
Queen:  The Queen is the Goddess–queen of Heaven and queen of the Underworld.
King:  The King is the Dark Lord, harvesting as he goes.

I did learn some things from this movie: 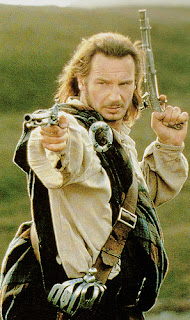