Soap can be used in many different magical applications.  With that said, I am currently accepting bids from soap makers to a make custom batch of soap for The Barbed Pentacle and the Perchta Power Project.  I will pay for the labor, materials, and shipping in cash via Paypal.  Your profits will be paid to you via advertising and intense pimping out.  So, when you submit your bid, you’ll need to have those two figures in your email.  Please email me at chirpatsparrow@gmail.com to find out more details and to get an ingredients list.  Bidding ends July 1st, 2015 at 12:01 AM EDT.

Paying the bills and announcements:

While there are many different theories about when Perchta is due to come this year, we here at the Barbed Pentacle like to believe that she’s going to visit tonight.  Make sure your house work’s done!

Our Lady of the wooden spoon,
whose two faces see the old and new,
You who admonish us to do our work and keep it true,
Keep us focused and strong so we may never swoon.
Bless us with thrift, industry, and tidiness.
Bind up our laziness.
Slit our bellies and remove all silliness.
Replace it with the straw of discipline, fortitude, and management.
A well run home brings gold to the pockets.
One great worker is worth three lazy ones.
Push us to strive for greatness.
Beat it into our souls and being.

These folks don’t want straw in their stomachs:

Congratulations to Tonie Ervin, the winner of the 2012 “Just Smack Me!” Spoon Decorating Contest! 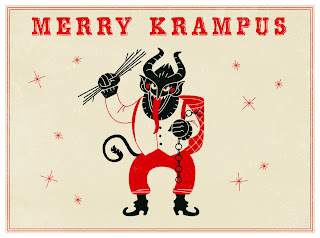 Who is Krampus and his hermaphroditic counterpart Frau Perchta?  They are the epitome of Yuletide Dom(mes)!

As you can tell from the video, Krampus hails from Switzerland, Germany, Austria, and into France and Northern Italy.  Pretty much anywhere they speak German or once spoke German, he makes an appearance. 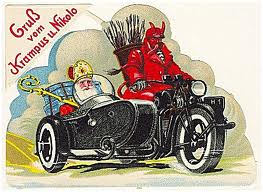 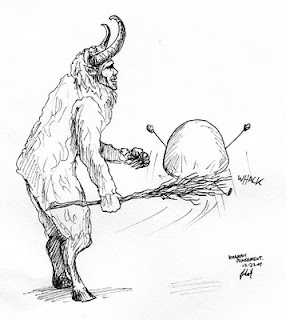 He is a carry over of the horned nature and pastoral gods like Pan and Cernunnos and of the trickster god Loki.  This can clearly be seen in his appearance and in the etymology of his name–”claw”.    Originally he brought chains to bind up winter and any roaming negative spirits.  He wore bells to wake the Earth up from it’s slumber and to ward off negativity.  He was also a bringer of fertility.  He is often portrayed riding a broom, which was a common sympathetic magic performed in fields to show the crops how high to grow. 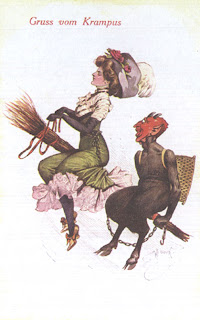 In the same spirit of Lupercalia, he bears a birch rod.  The rod is seen as a phallic device. With every lick he imparted his fertile seed to the community.  The beatings with the birch can also be seen in the same light as beating the bounds of ones home to ward off evil, which may be how his whippings were twisted into a punitive context by early Christians.

And why does Krampus have his tongue out?  The better to eat you out with, my dear!

The Christian version of Krampus is still a big deal in German speaking countries and the pockets of the world where Germanic folks settled.  Instead of celebrating him on the Solstice, he is celebrated the night before St. Nicolaus’ Day.  Every year there are huge Krampus runs in the Alps, where everyone turns out.  The runs were originally done by young men to chase away winter and to bring about the spring.  However, in some areas the runs were more like an enactment of the Wild Hunt than of a Yule Vigil. Kids today look forward to Krampusnacht and stoically bear whatever beating they may receive.
Krampus’ counterpart and sometime companion is Frau Perchta. 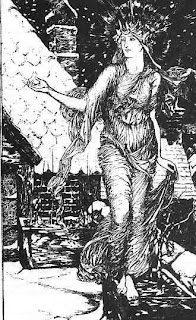 As previously stated, Perchta is a hermaphrodite, but often carries herself as a woman.  She represents both man and woman, both light and dark.  She is an incarnation of the goddesses Holda, Holle, and Frigg and vaguely of Brigid.  Her name means “blaze”,  and she is seen as a spinster who checks on the girls to make sure they’ve spun all the materials that they have available. She is also a leader of the Wild Hunt in some areas.  Sometimes Perchta is pretty and sometimes she is not! 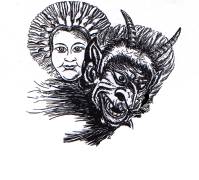 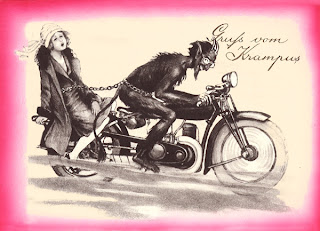 If you decide to go into Frau Perchta territory, make sure that you are experienced with edge play, and have antiseptic and other first aid materials near by.  If you are not experienced with edge play, an alternative is to blind fold your partner and use a plastic or wooden knife.  Both can be made to have sharp edges that don’t cut.  If your hoodwinked partner thinks you’re still holding a real knife, it will feel like a real knife to exposed skin.  Using a sterilized pin to simulate a knife point works well too.  Since Perchta means “blaze”, wax play would be an appropriate tribute to her as well.

There are a myriad of other Solstice traditions out there that are meaningful and fun as well.  The wild hunt is one of them.  This can be enacted by partners or a group and be something as simple as wild hide and seek or something more complicated and serious.  There’s also the battle of the Holly and the Oak Kings (or it can be Queens).   The Holly represents the waning year and the Oak represents the waxing year.  In some myths there is also an Ivy girl/boy who is a mediator.  An idea for this tradition is a mock Holly and Oak king battle, with the weapons being oak and holly switches.  The looser can be bound with strands of ivy for the real fun to start.  Holly leaves can also be used on the skin like a Wartenburg wheel or spurs.

Have fun and remember:

As with any sort of S&M and or sex ritual, be responsible.  Use safe words and condoms and respect boundaries.  No under aged participants or spectators.  Outdoor sex should be on private property.  Bondage should allow for blood flow.  If you break skin, use first aid to treat it and clean your equipment properly.  And for heaven’s sake, avoid the spine and kidney area! 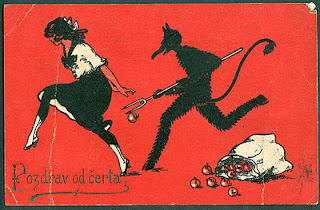