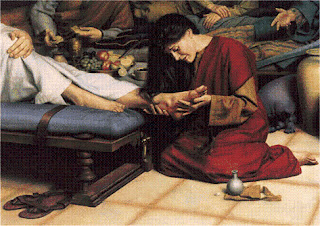 I first encountered the act of foot washing in a religious/ritual context several years ago at a wedding.  The couple was Pagan, but for various familial reasons, they had a Christian ceremony led by one of those “New Age” ministers.  I think she might of been Methodist.  You know the type.  A lot of times they are women.  Sometimes they wear a robe, sometimes not.  Their stoles are usually of some sort of African or other tribal design that they acquired in a “fair trade” arrangement during a mission trip, and they rarely mention Jesus or God as masculine.  The groom was seated while the bride knelt on a pillow and washed the groom’s feet from a basin of water.  Then she rubbed some lavender oil onto them, and then symbolically dried them with her hair.  To finish that segment of the ceremony (because it was a long ceremony), she dried his feet for real with a towel.  The minister, as a prelude to the washing, read from Luke 7:37-39:

“When a woman who had lived a sinful life in that town learned that Jesus was eating at the Pharisee’s house, she brought an alabaster jar of perfume,/Then she knelt behind him at his feet, weeping. Her tears fell on his feet, and she wiped them off with her hair. Then she kept kissing his feet and putting perfume on them./When the Pharisee who had invited him saw this, he said to himself, “If this man were a prophet, he would know who is touching him and what kind of woman she is–that she is a sinner.”“
[The image of the woman washing Jesus' feet with her tears and drying them with her hair has always fascinated me and has become my ideal act of submission.]
I forget exactly how the minister linked this act to marriage, since I’m sure she was progressive enough that the vows didn’t say “obey”.  However, there are a multitude of ways that this tableau can be worked into a handfasting, initiation, or as a visible sign of submission to your deities via a statue or someone who is aspecting. 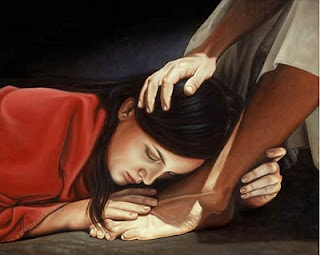 There is another passage in the New Testament that deals with foot washing.
1 It was just before the Passover Festival. Jesus knew that the hour had come for him to leave this world and go to the Father. Having loved his own who were in the world, he loved them to the end.
2 The evening meal was in progress, and the devil had already prompted Judas, the son of Simon Iscariot, to betray Jesus. 3Jesus knew that the Father had put all things under his power, and that he had come from God and was returning to God; 4 so he got up from the meal, took off his outer clothing, and wrapped a towel around his waist. 5 After that, he poured water into a basin and began to wash his disciples’ feet, drying them with the towel that was wrapped around him. 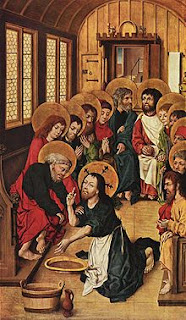 6 He came to Simon Peter, who said to him, “Lord, are you going to wash my feet?”
7 Jesus replied, “You do not realize now what I am doing, but later you will understand.”
8 “No,” said Peter, “you shall never wash my feet.”
Jesus answered, “Unless I wash you, you have no part with me.”
9 “Then, Lord,” Simon Peter replied, “not just my feet but my hands and my head as well!”
10 Jesus answered, “Those who have had a bath need only to wash their feet; their whole body is clean. And you are clean, though not every one of you.” 11 For he knew who was going to betray him, and that was why he said not every one was clean.
12 When he had finished washing their feet, he put on his clothes and returned to his place. “Do you understand what I have done for you?” he asked them. 13 “You call me ‘Teacher’ and ‘Lord,’ and rightly so, for that is what I am. 14 Now that I, your Lord and Teacher, have washed your feet, you also should wash one another’s feet. 15 I have set you an example that you should do as I have done for you. 16 Very truly I tell you, no servant is greater than his master, nor is a messenger greater than the one who sent him. 17 Now that you know these things, you will be blessed if you do them.” (John 13:1-17)

These verses are the basis for many Christian denominations to practice footwashing from time to time as a special service.  Some these denominations are Pentecostals, Mormon, Catholics, Methodists, and Presbyterians.  Many of these churches incorporate the practice into their Maundy Thursday service, when the Last Supper is traditionally celebrated.  This custom could easily be incorporated into Pagan ritual.  It would be an excellent way for the balance of power to be re-calibrated in a group that has undergone some strife.  It could also be used to show gratitude or solidarity.
To find out more about what the Mormon church calls “The Ordinance of Footwashing”, I set out to interview some Mormons.  The Mormons have gone high tech since the last time I dealt with them.  They now have Mormon Chat, which is good because the quality of their call center personnel has gone down dramatically.  The woman I spoke to barely spoke English and sounded like a recent convert.
Here is the chat that I had with “Austin” (I assume he’s Elder Austin):

Welcome to Missionary Chat.
Thank you for your interest in talking to a missionary from The Church of Jesus Christ of Latter-day Saints.  The purpose of Mormon.org chat is to answer basic questions about the church and its beliefs and to provide opportunities to learn more.
Before we begin, will you share a little about what brought you to chat with us?
A missionary will be with you shortly.
Agent [Austin] is ready to assist you.
Agent [John] has joined the chat.
Austin: How can we help you?
Austin:

Me: I am doing a comparative study on the practice of foot washing, and I have some questions.
Austin: okay
Me: I’ve read through different things, but I’m still having trouble piecing together in my mind exactly how the ordinance of foot washing is practiced.  Is there anything special to it or is a basin brought out and the washing begins?
Austin: I have no clue.  Do you have any questions about our beliefs?
Me: Oh my.  I’ve called the hotline twice and kind of gotten the same answer.  On your website (I’ll have to hunt down where), it says that Joseph Smith (I think) set up the ordinance to go along with Jesus’ washing of feet at the Last Supper.
Me: So I’m guessing by your response and the others that I’ve gotten that it’s not a widely practiced thing.
Austin: Right.  I’ve never heard of it being performed in a religious way since Christ did so, but I did just find the page you’re talking about and I’ll read up on it as soon as possible.  Is this the page?  http://josephsmithpapers.org/paperSummary/journal-1835%E2%80%931836
Me: Yeah I think so.
Austin: Okay I’ll read that as soon as I can

Are there any other questions?
Me: No, that’s it.  Thanks!  I really appreciate the help.
Austin: No problem

Have a good day and God bless

Me: You too!  Blessed Be!
Agent [John] has left the chat.
The chat session has ended.
Remember, Jesus and I love you! (I couldn’t resist.)
As soon as Austin gets back to me, I’ll post another section to part 3.  Part 3, section B will be about the Muslim practice of footwashing, which is somewhat different from the Christian practice.