I hope everyone has been having a happy Samhain/Beltane (depending on where you’re located).  Mine has been nice, but a little strange.  At this time of the year and again around Beltane, the veil between the worlds is thin.  Some people believe that it’s so thin that it disappears all together and that spirits, ghosts, fairies, and other beings (including us) can travel freely back and forth between the worlds.  Because there’s nothing keeping the mischief makers at bay during this time of the year, objects that were here one minute tend to disappear as if into thin air. This is also the traditional time to celebrate the Descent of the Goddess (http://barbedpentacle.com/2011/11/enjoy-the-descent-of-the-goddess/) into the underworld to seek her missing lover, who like several objects from my home this evening, appeared to have vanished into nothingness.  While there’s many different Goddesses who have been reputed to have made the descent, the one that most folks think of first is Inanna.

Basically this is her story:

Some people have speculated that the much celebrated “Dance of the Seven Veils” is an ancient recreation of this myth.

Other people have disproved this theory.  http://www.shira.net/sevenveils.htm  While the debate is interesting, it doesn’t change the fact that the dance itself can be used in ritual to represent the seven gates that Inanna and some of the other descent Goddesses traditionally travel through.  Although modern belly dancers have cemented certain moves as being integral to the dance, there’s no reason why a graceful and willing priestess couldn’t make up her own moves as she drops the veils.  It’s an interesting twist on a story that can become trite if a group isn’t careful.

Another descent story centers around Persephone.  Poor Persephone, pretty Persephone, or is it “Oh please don’t take me (but snatch my ass up quick) Persephone?  That’s always the question.  If you’re familiar with the Persephone story, then you’ll understand where I’m going with this.  Supposedly, Persephone was stolen from her mother’s care and taken to the Underworld by Hades to be his bride.  But a more likely scenario is that Persephone saw her chance to escape an overbearing mother, ran off with a bad boy, and fulfilled a kidnapping fantasy.

Pomegranates, those exotic fruits with the sexy red arils that pop little squirts of juice into your mouth just like suckling on a clit, play an important part in the Persephone myth.

If Persephone had been able to resist eating the pomegranate, then she would have been allowed to return home free and clear, but because she gave into temptation (and really, who could resist something so succulent?), she divides part of her time in the Underworld and part of her time her on Earth. http://www.pomwonderful.com/about/pomegranate-history-legend/paths-of-the-pomegranate/

Pomegranates, besides being fun to eat in bed, can be used in a couple of different ways.  The juice from the arils can be smeared onto your lover to create pinkish/red streaks.  Juice acts as an extremely temporary dye.  The skin of the fruit can be used as a permanent vegetable dye, good for things like veils.  http://thenaturalsurface.blogspot.com/2010/01/how-to-dye-with-pomegranate.html

Look for part 2 of “Piercing the Veil” tomorrow.  The “Feed Your Head” series will resume as soon as some of my experiments are completed.

These folks know what arils are:

Tweet
While a lot of modern Pagans tone down Beltane because of families and such and the whole fluffy bunny aspect of the current state of Paganism, Beltane is really all about sex. 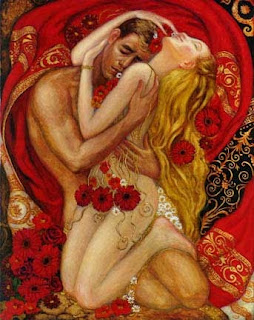 The most obvious representation of the Great Rite, Hieros Gamos, and the importance of ritual mating at Beltane is the Maypole. 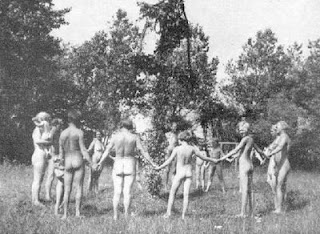 Remember, a May pole without a flowered wreath is just a hand job!
I’ve seen a lot of wreathless May poles in the last few years, and I’m not sure why this trend has developed.  Perhaps it is ignorance or perhaps single people are just preparing the poles.
Beltane, like Samhain, is a time when the veil is thin.  While we typically think about ghosts and spirits coming through the veil at Samhain, Beltane is usually seen as a time for fairies. 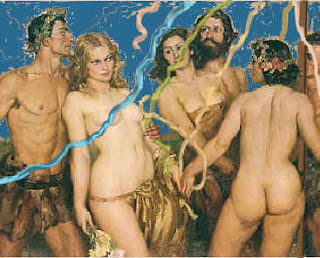 Beltane also seems to be big with skyclad celebrants.  Of course the sexual nature of the holiday has a lot to do with the desire to forget clothing, but it’s also (in many areas) the first warm weather holiday.  It’s nice to feel the sun soaking into your naked skin. 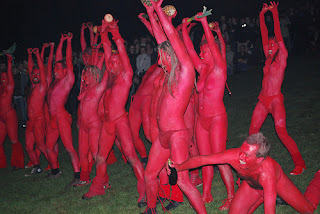 Nakedness+Pagans=Body Paint  Go for a solid color theme, or explore your creativity and go for designs.  Here are some body paint ideas.
Beltane, like other cross-quarter holidays, is a fire festival.  Traditionally, live stock were driven between fires, and people jumped fires for luck. 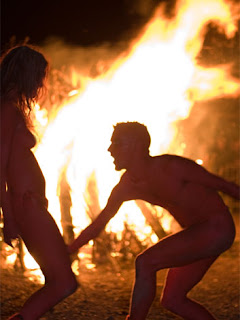 At this time of year, you usually see the spinners: 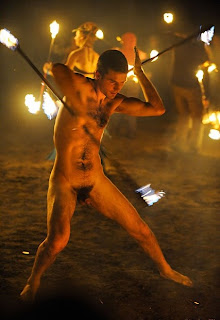 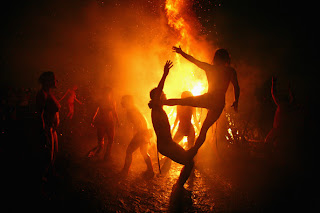 Beltane also seems to be the unofficial start to the festival season.  Of course, every poi spinner has to come out to show off. 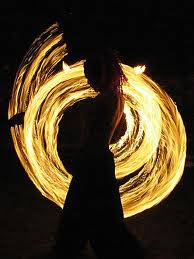 They annoy me because they all seem to act like they’re something special and are really only enjoyable if I’m taking something that accentuation light trails.

While the Lord and Lady hook up during Beltane, many other couples do too.  In ancient times, it was customary for the young man to build a brush and flower bower to bed his chosen lady in.  This custom is still sweet and timeless today. 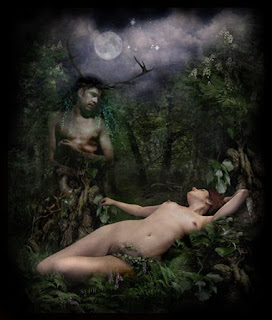 While you make love, feel your inner deity come through and connect to your partner’s inner deity. 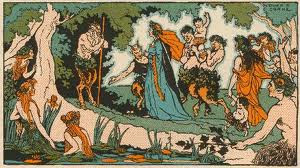 May you experience fire, flowers, and an ecstatic May pole dance! 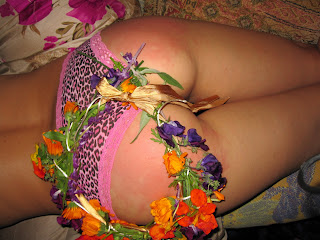 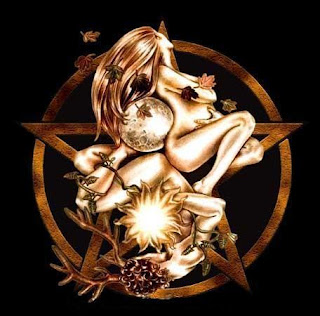