From a Hare Krishna blog:

“The dust of Krishna’s Lotus Feet can also give devotional service. Somehow or other we must go after the dust on Krishna’s Lotus Feet!
‘So how is it attained?’
It may be attained in serving the deity. In the Nectar of Devotion Book, it is said that one of the form of deity worship is that the pujari must touch the Lotus Feet of the Lord, while he is on the altar. So that is a prescribed duty of worship. It is a nice prescribed duty where you have to touch the Lotus Feet of the Lord. It’s there in the scripture. So in that way pujari service is quite special – there’s no doubt about it!……..That devotees must bow down to Krishna, and such a devotee that bows down attracts the mercy of Krishna. In other words, it is through humility that one attracts the mercy of Krishna. So in the concept of the dust of the Lotus Feet of the Lord is a concept of humility.” 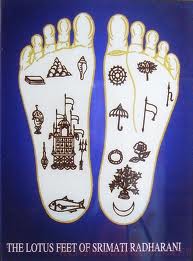 Lotus Feet are a curious thing.  Hare Krishnas are curious people.  It’s been really hard to find a definition of lotus feet or somebody who was willing to talk to me about lotus feet.  I guess collecting the dust off of an idol’s feet is hard work.
According to a website that I found, Lotus feet are really too wonderful to explain with mere words.  They’re just too sublime.  However, the lotus, and by extension the lotus feet and the feet of any deity, spiritual teacher, or statue or either, represents spiritual development, creation, purity, and rebirth.  Some what like the Cauldron of Cerridwen, I suppose.  As was discussed in Part 1, devotion to a person’s feet is often seen as a sign of humility, and the same is the case here.  This is a continuation of the Hindu practice of Pranama, except somewhat more elaborate.  According to the site, “communion with the divine is established.”  This tradition could easily be adapted into Pagan practice before a ritual or while invoking deity to establish that link.  While the touching is going on, names of the deities are often recited or chanted.  Once again, that’s not much different from how some Pagans invoke deity.
That website author also says, “that the spiritual master plants his lotus feet in the heart of the disciple. Sincere spiritual students are encouraged to enshrine God’s lotus feet or enshrine the lotus feet of the master within their heart.”   That sounds like a boot on the back of the neck to me!  It’s a gentler form of the D/S dichotomy that has been previously discussed.  Worshipping Lotus feet can also absolve you of any Karmic debt as well as bring your soul to a higher plane of consciousness.  “In the act of falling at the lotus feet, touching the lotus feet, gazing upon the lotus feet or surrendering to the lotus feet, the ego can be subdued in favor of a higher state of awareness.”  In essence, you’re putting a collar around your ego so that you’ll attain enlightenment. 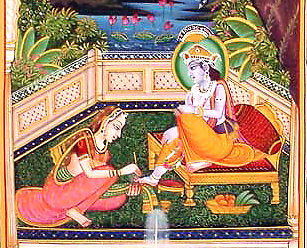 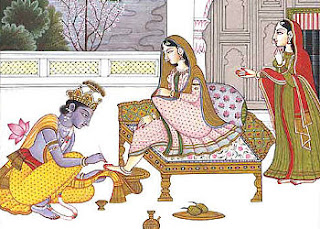 How are Lotus Feet worshipped?  They are sometimes painted with henna or paint, bejeweled, rubbed down with oil, smothered in flowers, and given offerings of rice.  These things can all be done to a statue’s feet at any time in ritual, or they can be done by someone representing or aspecting deity.  They can also be taken out of a traditional ritual context and be done to someone who is acting as a living statue or to someone’s Dom/me or lover.  It would be a very touching ritual to add to a handfasting or wedding ceremony, especially if the couple reciprocated, as in the pictures above.
What about the funky symbols?  These symbols are representative of different divine aspects of the feet owner–a visual representation of the divine light that supposedly shines forth from their soul and third eye.  The conch shell represents succor.  The crescent moon represents soothing cool light and blessings.  The thunderbolt represents karma.  Symbols from your own tradition can easily be substituted.  These can be painted or hennaed onto the “living” deity’s feet or, for the really brave, the symbols can be more permanent.
Honey also comes into play with Lotus feet (yes, I’m thinking that sweet thought too!).  Honey is viewed the world over as a holy and sacred food by many religions.  The same is true with the Hare Krishnas.  Lotus honey, also called Padma-madhu, is said to heal practically everything (which is true of all honey), but particularly eye problems.  By eating Padma-madhu, your spiritual sight can be revitalized and cleared. With this tradition in mind, a ritual for spiritual guidance can be created around any type of honey–perhaps licked off of your own honey!
I finally got somebody to answer the phone at Prabhupada’s Palace of Gold.  Sue, the receptionist, said that basically the concept of Lotus Feet is the desire to walk in a great person’s or presence’s footsteps. (Thanks so much Sue…..)
Part 3 will be coming soon.  Before you walk away, chant this Buddist Mantra so that anything you may step on with your Lotus feet will be reborn quickly:  om kraytsara ghana hung hri soha.
Tweet