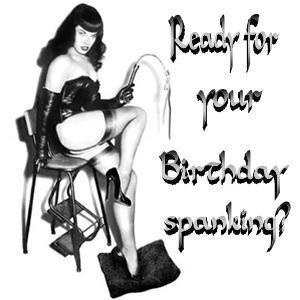 It’s also not a birthday if at least one person doesn’t try to swat your ass.  Ever wonder where that tradition came from?  No, it wasn’t just some sick fucker trying to ruin a little kid’s day nor was it some kinky person trying to please their partner.  It actually started with the nameless ancients, who believed that evil spirits surrounded people at all times, especially on their birthdays.  These evil spirits were devious enough to want to make a birthday a death day.  In order to get rid of the evil spirits, the birthday person was spanked to drive away the evil.  With each swat, a prayer or blessing was said for the coming year, hence, “One to grow on.”  This belief was wide spread enough that many cultures, not just European/North American, have traditions of folks being somewhat brutalized on their birthdays.  As time went on and Christianity took hold, it was said that if a person wasn’t spanked at least once a year, that the soul was being softened up for Hell and that the body was being softened up for the grave.

There’s many ways that this quaint tradition that many of us remember from childhood can be given a magical hit.  The easiest method is to make sure that as you deliver the swats, whether light and playful or hard enough to be remembered for a few days, that you say those blessings for the coming year.  It’s like cakes and ale: “May you never hunger” and “may you never thirst.”  With out those blessings, you’re just eating and drinking in circle.  With out these blessings, you’re just smacking some ass.  You could use the traditional blessings stated above, or you could be thoughtful and write blessings specific to the birthday person’s situation.

You can also, as your hand connects with the other person, send nice energy to them, to sustain them for the coming year.  This energy would ideally back up your blessings for an extra magical boost.  If you’re not familiar with sending energy, just imagine that as your hand connects, nice warm light is transferred from your body to the other person.  Or, you could go one step further and not only say the blessing and transfer energy, but imagine what that blessing is actually saying.  For example, you would say “One to grow on”, send that nice energy into the person, and imagine the person growing physically, spiritually, and mentally.  Because of the possible complexities of this magical working, don’t feel like you have to rush the birthday spanking.  Just let it be nice and leisurely (and it’s their birthday, after all, so it SHOULD be fun!).

Number magic is another natural choice for a magical birthday spanking.  Since birthday spankings traditionally consist of the number of swats plus a few extras, numerology, tarot card numbering, Kabbalah numbering, and the I Ching can all be used in the magical working.  There are lots of different ways these various divinatory systems can be employed.  The simplest is to look up what the number of the person’s age represents.  Then, if it is an auspicious meaning, that meaning can become part of your intent with the spell as you deliver the blows–literally beating it into the recipient.  If the meaning is inauspicious, then your intent would be to beat into them things that would counter act the meaning.  You may even want to beat out a protective astral shield for them, in much the same way a black smith would have hammered out a metal shield, except you would be working with skin.

Another way to integrate number magic and divination into the spanking is to pay attention to the recipient’s reactions to your licks and divine their future for the year from that.  For example, if the recipient is fairly quiet up until lick number 7, when he/she whimpers or cries out or laughs, then the meaning behind that number (from whatever system you are using) would indicate their fortune for the year. 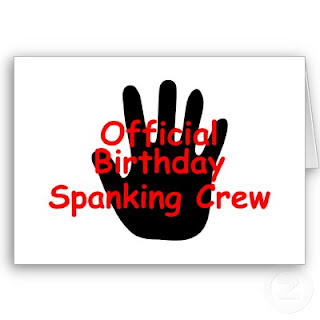