Dark Moon Rising, written by Raven Kaldera, is a really good book.  However, it’s not a great book.  The main reason why it’s not a great book is because Raven Kaldera invited his friends and associates to contribute chapters, essays, rituals, and poems to his book.  Many of these contributions weakened his original work, especially the essays contributed by the famed Morning Glory Zell (she’s still white bread).  It would have been better if these contributions had been collected into a slimmer companion volume or into an appendix section.   There are also some line editing issues that seem to be the hallmark of cottage and vanity presses (of which Asphodel Press is one).
These issues aside, there is a lot of good information in this book that will be genuinely helpful to folks. [I've had several readers tell me what an invaluable resource this book has been to them.]  If you are new to either or both S&M or Paganism, I would recommend reading a general how-to book for both subjects before reading this book.  Kaldera does his best to provide definitions, but being unsure of what the jargon means will definitely diminish the full effect of the material.  For a short suggested reading list, please check out my blog entry entitled “Sadomasochism, Pain, and Wicca/Paganism“.
While almost everything presented in the book can apply or be altered to fit any tradition, Kaldera is of the Northern  Tradition Shamanistic path, which should be remembered when reading his anecdotes.  To be honest, I don’t have a firm understanding of what the tenets of that path are, but it seems like it’s similar to Asatru, but not really.
The title of the book comes from the Mabon Wild Hunt ritual that he has included in the book.  I have to say that out of all the rituals that are in the book, the Mabon ritual is the only one that really intrigued me and made me wet to enact it.  It was the only one that seemed like it would fulfill my personal needs and desires.  That’s not to say that the other rituals aren’t good; they’re just not what I’m looking for. [As you may remember, I'm not really into heavily scripted rituals, and a lot of his rituals are heavily scripted.] 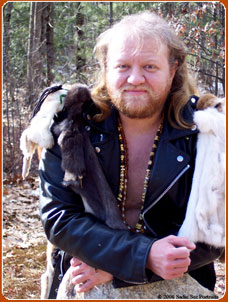 To give you a better idea of whether this book would be a good buy for you, I’m going to outline the chapters.  The book is broken up into six parts, multiple chapters and sections, and interspersed with photos from Shibari-Do practitioner Bridgett Harrington.  Some of the photos were nice, a few were stimulating, but most I would have traded out for others.  I’m also not really taken with the poems included in the book.  Perhaps they should have been in an appendix.  They kind of just left me cold, and not in a fun way.
Part I: Introduction and Definitions
“The Ordeal Path”  This is the intro.  You should always read intros unless it’s to The Scarlet Letter.  The intro to that book can be summed up in a paragraph.  And in case you haven’t read The Scarlet Letter, it’s got some great masochistic elements.
“Words of Power”  Read this if you’re new to things.  Skim this if you’re not.
Part II: Sacred Pain
“Sacred Pain”  This is more background information on using pain in ritual.  It has some nice anecdotes in it that almost verge on being strokable.  If you’re new, read it completely, some sections twice; if you’re experienced, just read the stuff in italics.
“An Intimate Look at Ritual Pain”  This is a section written by a “friend” and not Kaldera himself.  It’s not a great section, but the anecdotes in it are worth a read.
“Dark Ecstasy”  Skip it.  It’s not a Kaldera chapter.
“The Many Paths of Earthly Bondage”  Even though this chapter isn’t written by Kaldera, it did have some interesting thoughts on bondage that were interesting to me, and I’m sure very helpful to new folks. 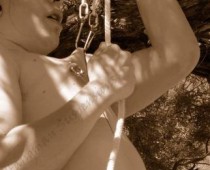 “Between Earth and Sky”  This chapter is all about hook suspension and is written by Kaldera but with many anecdotes from others.  I have to admit that while rope suspension is absolutely lovely, hook suspension for many years completely terrified me and to some extent I viewed it with disgust.  It wasn’t anything personal to the folks who practice it; it just was so not for me or in my realm of thinking.  However, after reading this chapter and some work that I’ve done this year with the Descent of the Goddess, I think I’m almost ready to don lapis beads and hang for a bit.  It still terrifies me, but that’s part of the allure.
“Chain of Command Part I”  This section is not by Kaldera, and it did nothing for me.  It should have been in an appendix.  It kind of pissed me off to have to read it in amongst the other chapters.
“Silence” is also not a Kaldera chapter, but it’s skim worthy.
“Sacred Toys, Holy Tools”  This chapter is by Kaldera.  In it he offers a refreshing perspective on how the things that most people consider sex toys can be transformed into consecrated ritual tools.
Most BDSM folk refer to their tools as “toys”, just as they refer to some serious sensation work as “play”, largely because they want to minimize the “scary” aspect of these practices, and make them seem light and fun, so that outsiders will not be frightened.  Most Neo-Pagans refer to their various magical tchotchkas as “tools”, even when they don’t actually use them for any purpose except decoration and showing off.  Personally, I’d like to see people in both communities being a lot more clear about what’s a toy and what’s a tool.  Certainly those of us who cross both have no excuse.
Page 97
“The Invisible Toybox”  The chapter by Kaldera has a lot of really neat ideas in it.  Yes, I read it twice!  I’ve also tried out some of the suggestions, and they work pretty well.  Read it a time or two and adapt the suggestions into your own practice.
“Opening Up”  This chapter may be something you find useful and then again you may not find it useful.  It really depends on what your kink is and how “open” you already feel and want to be.  Definitely read it and decide for yourself.
Part III: Journey to the Underworld
“Journey to the Underworld”  This chapter is a good chapter, but not a great chapter.  I’d describe it as a piece meal chapter.  Some stuff you may want to slow down to read, while you may skim through other sections.
“Staging Sacredness”  This chapter is a good introduction to constructing a BDSM ritual for beginners and it’s a good review for veterns.  It contains some helpful check lists and things to consider, like children and AIDS.
“Master of the Underworld”  In this chapter Kaldera discusses more in depth his own experiences on the Ordeal Path, but he also touches on some truths about being a Dom that would be insightful for Dom/mes and Subs alike.
“Divine Intervention”  I’m not sure who wrote this chapter, but I would either skip it, skim it, or jerk off to it.
“The Way of the Ordeal Master”  This chapter is a good read for folks who are thinking about being a dominant in a Pagan setting or for folks who are just curious about what their Dom is thinking.
“Dark Tantra”  Skip this chapter.  It’s a waste.
“Q-Moon’s Ordeal Path Ritual”  I’m not even sure why the pages for this section where expended.
“The Dark Moon Rising Mabon Ritual”  As you may remember from above, I really enjoyed this ritual.  A definite read.
“Baphomet and Babalon Rite” -”Ordeal-Ritual of Dedication to Lilith”  These chapters did nothing for me, but they’re worth skimming.
“The Descent of Inanna Ritual”  This was an interesting read.  I have trouble visualizing how this ritual could possibly work in reality since it’s so complicated, but it got points for being graphic.
“John Barleycorn”  I like my “Threshing the Corn Mother” ritual better.

“Shadow Play”  This section sounds like it was written by somebody in the Reclaiming Tradition, although I assume it was written by Kaldera.  I would skim it.  I would only spend serious time on it if you’re all about your inner demons and doing therapy and stuff.  Personally, I’d prefer thirty minutes under a stout flogger to talking to a therapist.

“Chaining Fenris” This ritual goes with the above chapter.  Again, flog me please and get it over with. 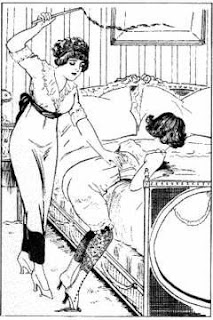 Part IV: The Path of Service and Mastery
“The Path of Service and Mastery”  This chapter discusses some serious ethical and personal points.  It’s a definite read.
“Sacred Masks”  This chapter explores the different archetypes that are encountered in most people’s BDSM experience.  I really liked it.  It deconstructed things in a way I had not previously considered, and the ways that the archetypes are arranged make it easy to evaluate your BDSM preferences and experiences.
“Being the Mirror”  This chapter is written by Kaldera’s boy, Joshua, and offers insight into Kaldera’s personal BDSM spiritual life and gives tips for Spiritual subs.  I really like the prayer at the end.
“Don’t Break the Spirit”  This chapter may appeal to Dom/mes more than subs.  It’s at least skim worthy.  I would skip to the section that discusses words of power, touch, and ritual.
“Shaman’s Boy”  This chapter is also written by Joshua and offers another glimpse into Kaldera’s personal life.
“Dedication to Sacred Service”-”Oath of Service”  These are some self dedication rituals.  I would personally only use them as a source for ideas, not verbatim.
Part V:  Guardians of the Gate
This whole section, that is made of chapters of varying degrees of great writing and annoying chatter.  It can be summed up with this phrase:  You are your deity’s bitch.  Deal with it.
Part IV:  This Leather Pagan Tribe
This section is just a long poem, that after I read the first stanza, I put the book down.  I would have left it out.
As I said before, I did like the book and I found some sections extremely interesting and helpful.  Other sections I wish had not been included.  I was surprised by what wasn’t included in the book.  I can only assume that things like fire and electrical play were not included because Kaldera doesn’t work with those techniques and doesn’t know anyone else who does either.
So, in conclusion, there’s enough good stuff in the book to make it worth the purchase price.
Tweet