**********************************************************************************
Of Wiccan Bondage
Ever since I’ve found this photo, I’ve been fascinated by it.  I like pretty Asian women, and I like them even better in shibari or other bondage.  I had thought originally that I might write a bit of fiction using this photo as inspiration (because believe it or not I can write some very strokable prose), but my muse has led me in a different direction.
I think all religion is bondage.  If you’re a good and proper adherent to your religion’s beliefs, then you’re a slave. Even with “free will” and “free choice”, if you’re a really ardent believer then you’re a slave to the Divine force that you follow.  Just as the Nazi’s had “Work brings freedom” over the gates of Auschwitz, I’ve had riggers whisper, “Bondage brings freedom” before they put the finishing touches on me. They were right.
People who are not into bondage, or any sort of dominant/submissive acts, may not understand what the bondage riggers meant. In voluntary physical bondage, you have willingly given up all control. You can struggle, but there’s no reason to because you can’t get away. You can scream, but there’s no reason to because your words aren’t going to change the plan that your Dom(me) has decided upon. There’s no reason to do anything but trust and go with the flow, and in that forced helpless state, your mind is set free to discover things about yourself you’re normally too busy to notice. Things are quiet enough, finally, for your mind to be free to roam within the depths of itself.
Spiritual bondage works the same way. Once you have given your will over to your Deity, and you fully trust your divinely provided intuition, you’re free from worry, free from guilt, free from distrusting the way things work, free to embrace happiness. This freedom opens up other freedoms that often merge with the same freedom that physical bondage brings. I know all of this sounds a little like butterflies and ladybugs, but just like everything, there’s a spider and scorpion side too.
Wiccans who embrace all aspects of their faith fully are bound by some fairly stout ropes, that if broken by free will, can bring about some pretty powerful strokes from the Cosmic scourge. The main belief that Wiccans (myself included) are bound by is the Wiccan Rede, “‘An it harm none, do what thou will.” You can ask five people, and each person will give you a different interpretation of it. This is where the freedom of being guided by Divinity comes into play. I believe that the Rede should be interpreted differently by each person because each person engages life differently. However, despite this belief, if I go against what my God and Goddess are leading me to do, if I break my bond not to harm, then there are consequences–just as there are in the play room when you choose not to stay put.

Most Wiccans also follow the Threefold Rule (or Law): What you do, say, and spell, will come back to you threefold. This is where the Cosmic scourge comes into play. Since you have willingly decided to be spiritually bound by Divinity, you have to trust that if you’ve been “good” that the lash will be soft and playful (and maybe lined with fur!), but feel certain that if you’ve broken your bonds, the lash will be harsh and bloody. The same is true of being in bondage to Divinity as was true in the Old Testament of being bonded to Rehoboam, “My father chastised you with whips, but I will chastise you with scorpions.” I believe that because most Wiccans have sought out this spiritual bondage and were not forced into it, that the Universe holds us to a higher standard of behavior. Like any good submissive, we need to push ourselves to meet that challenge all the while realizing that we’ll never reach perfection.
Just as all Wiccans have been given different interpretations of the Rede, Wiccans also engage their Deities in a myriad of different ways. While a lot of Wiccans like to chase the fluffy bunny aspects of Divinity down the endless rabbit hole, I tend to like to linger in the shadows for a quickie against the wall with my God and Goddess. Sometimes they don’t even take my panties off; they just pull them aside. Then we rip the fluffy bunny apart barehanded and enjoy it raw.
My bondage is sexy, dark, and bloody. My bondage has been sealed with sex and blood, just like an “Old Time” Gardnerian handfasting. And that’s as it should be. The only key that will unlock my shackles is my trust in my Deities, since my bondage and servitude to them has set me free. 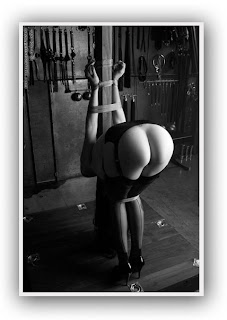