The Lupercalia Tradition: a Strega vignette
The fire flickers off of the participants’ faces as they wait in a silent line.  One by one they step up, most in a light trance from the setting and the previous events in the ritual.  The silence and wait add to the anticipation of the ritual’s end:  the scourging.  The female participants are anointed and scourged by a priest in the aspect of Lupercus and the males by a priestess in the aspect of Juno.
The participants contemplate the things they want to purge from their lives, the things they regret from the previous year from which they want purification.  Earlier, the high priestess extolled the participants to be mindful that even loving deities punish their children when they step out of bounds.
The scourge itself looks like many other scourges, made of suede with a stiff handle and flat falls.  A chain mail scourge that was made visible earlier in the ritual added a bit of unease to the proceedings and heightened everyone’s awareness.  The next participant removes her coat to receive the lash.  She takes a deep breath of acceptance in the chill night air.  She stands facing the priest with her arms outstretched, welcoming the lash.  He swings and brings the scourge lightly across her breast to purify her soul and heart.  He brings it down again gently across her lower stomach to impart fertility.  The priest places the third and final stroke across her back as a proxy punishment for perceived misdeeds known only to her and her gods.  The stronger stroke makes her gasp softly.  She bows slightly to Lupercus and Juno and moves out of the circle.  The ritual ends as the priest and priestess scourge each other and the participants howl at the moon with lupine enthusiasm.
The participants of the above ritual that I spoke to said that they enjoy this level of scourging.  It’s an annual event and is the only time that all the participants (who choose so) are scourged. [A representative of the Goddess is symbolically scourged during "The Descent" at Shadowfest.]  The participants said that this level of scourging is a level that is more comfortable than what some groups practice.  One participant said that the Lupercalia scourging seems sweet compared to the random punitive scourgings that a previous high priestess of his would dole out. 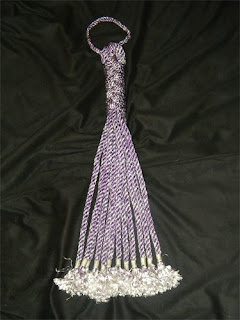 For this section I emailed 25 groups of all manner of traditions, paths, and nature religions in North Carolina, Georgia, and New Jersey.  Many groups did not respond. (Perhaps they don’t scourge or perhaps my email disgusted them.)  However, 13 groups responded, enough to get a snap shot of what’s currently being practiced with the scourge.  Five groups responded that they do not use the scourge in ritual.  Out of these five, one was a Heathen/Asatru group, one was a Reclaiming group, and the other three were Wiccan groups of various traditions.  One Wiccan group, who says that they practice Congregational Wicca, said that they use the scourge in initiation, but that they don’t strike folks.  Instead, they swish it around in the dark for sound effect and to set a tone of dread before the initiates set out for their rebirth. 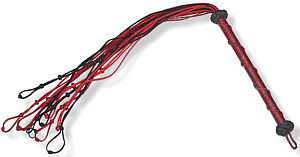 Seven groups responded that they do indeed use the scourge in their rituals.  The Strega group above and another group that describes themselves as Scoriada (another Italian Witchcraft tradition) only use the scourge for purification rites.  One Wiccan coven, that describes themselves as “closed,” confirmed that they scourge, but declined to say for what reasons because of their vows of secrecy (I guess it’s like spies and the Mafia!)  The Alexandrian group that responded said that they mainly scourge in ritual to raise energy.  However, they added, “The scourge is meant as a tool of purification, but most people see purification as a sort of cleansing and that’s not how we use it. In ceremony where we’d want to purify or “scourge” something, meaning cleanse it, my clan most often uses an alternate purification substance, salt, instead. In fact our actual ritual scourge is rarely even present on the altar because of that fact.”  It’s interesting to note how similar the word “scour”, what one would do with salt, is to “scourge”.
Their priestess continued,”In the ceremonies where our actual scourge is used, it is used basically to “excite” the energy of the physical body, snap the person firmly into the physical by awakening their physical energy. This is its capacity as the magical tool of the sephiroth Geburah on the Kabbalistic Tree of Life. So basically its a tool which purifies the body of its sluggishness, not something we use to “punish” or “cleanse” incorrect ways or thoughts.”
The British Traditional Witch Coven that said they follow the New Forest tradition, said that they scourge during initiations and for purification and to raise energy. “There is a good portion of the Mysteries we interact with and experience whose symbolism finds a strong home in the scourge – in my opinion, those who practice the Craft as derived from the New Forest Wicca could never eliminate it and still be practicing that same Craft.”

The Gardnerian coven that responded to my email offered a wealth of anecdotal evidence for my study.  They use the scourge to:

The priestess clarified, “Beyond raising “physical” energy prior to rites, it can and typically *does* induce trance helpful during immanent rites.  The scourge equates with “severity” as manifested in the athame’ — one of each side of the double-sided blade connoting “mercy”, the other, “severity”, which represents the fact that Witches don’t *start* trouble, but if met with it, WILL finish it.

Yes, I know the concept of using the scourge to discipline students is “controversial”, but it need not be, as it’s akin to “beating the bounds” of one’s property to ward off negativity, or doing other things to impress an idea or point on someone.
Using the scourge in this way is specifically allowed in The Ardanes. I’d rather impress someone so they don’t forget and repeat magical mistakes, than risk Initiates becoming “slack”" about sacred matters

Mostly the discipline is good-natured, even funny — but my Initiates know that I can and will wield the scourge in this way if I choose to.
Scourges are also sometimes used to “whip” dancers during a Cone of Power, so they’ll dance faster and faster. And it may be used during certain bawdy Craft games as well.
Of course, we’re precise about how many strokes everyone gets. We use a Witch’s Ladder to count them so we don’t exceed the traditional limits (40, 80, or 160 tops), and note when 3, 7, 9, 21, and 40 strokes have been meted out.
My Initiates “bow” at each Quarter when calling the Guardians of the Watchtowers, and when we bid them adieu when our ritual is done (i.e., when dismissing the Guardians at circle’s end).”
Thank you to everyone who bravely responded to my emails and questions about scourging.  You helped keep the old ways alive.
Just to recap about scourging:
Tweet